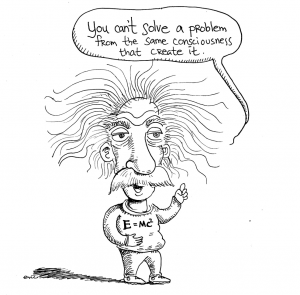 “That this is a first is open to debate, yet a reset-and-clear button embedded deep within the brain has been found to shower or clean the limiting information held within the nervous system and immediately shift from your unique problem-set to a solution-set so you do not keep repeating the same sh*t, different day struggle.”

“The end result is that health and personal challenges, miseries, limitations, blocks and dilemmas resolve with a stunning simplicity, without years of therapy, medication and expense says Dr. Neal Robert Smookler.”

What Smookler is describing is a fascinating method that looks to a tiny endocrine gland in the brain for answers.

“Due to dietary as well as environmental factors, this tiny endocrine gland has ‘locked-up’ in most people.”

“By addressing the Pineal gland which has ‘frozen’, energy redistributes from the primitive, fear based lower brain to the higher brain where the consciousness of all possibility, all potential, all solution resides.”

“The lower, survival brain is quite resistant to change as it is seen as a threat to the ego, the status-quo. It’s easier to return to the safety of home (old patterns, old habits, old answers) … making transformation extremely difficult.”

“We can now influence the energy mapping of the brain in order to access levels of wellness previously thought unimaginable.”

“After my first Pineal Reset, I was, uh … humming. I was literally resonating in what I can only describe as an insulated cocoon of warmth, openess and peace. It felt like a valium taking effect while in a flotation tank. I felt like my mind, my body, even my cells went through a reorganization. It was like nothing I had ever experienced. Life began to take on a bit of a magical view that I hadn’t felt before. I remember waking up one night because I was so happy.”

So just what was this discovery? “In a sense, ‘water-wings’ for dissolving personal impediments.”

“This Pineal mechanism, is in essence, a reset-and-clear button for limitation embedded within the nervous system.”

“In mere nanoseconds, the spark ignites the previously seized-up endocrine gland sending a neuronal surge while spreading the voltage potential from the limbic system of fight-or-flight to the neocortex of untapped potential.”

“A re-mapping of energy occurs as we are literally freed from the shackles of the reptilian brain of constraint and released into the higher, human brain – opening you up to an entirely new way of living in health and with purpose.”

The question then arises, how is this explained?

“Our lower brain fears change, rather it thrives in a state of illness, fragmentation, confusion, obtuseness and uncertainty. The neocortex is where the experience of wholeness, insight, revelation and clarity lie.”

“The Pineal Method heightens activity in the neocortex enabling access to the solution lying behind the illusion of what-appears-to-be.”

“It’s the old adage, you can’t solve a problem or paradox from the same consciousness that created it. A problem or challenge belies a similar analogy – that’s how the Pineal Method so often assists people to solutions that were historically not in their sight lines.”

“The Pineal Method creates a brief interruption, a literal suspension of PROBLEM CONSCIOUSNESS which makes it possible to catch a glimpse of the SOLUTION CONSCIOUSNESS hiding behind the illusion of the impasse, the plight, the predicament.

“We glimpse the greater solution behind the perception of what is (the illness, problem, challenge, misery, limitation.)”

The solution (and this is the killer) was there all along!”