Recognized as Massachusetts first Alphabiotic educator and consultant, Dr. Neal Smookler has for the last quarter century pioneered the introduction of Developmental Alphabiotics throughout Boston and New England. After opening Boston’s Flagship Alphabiotic Center on Newbury Street in August 1992, he has maintained three full time Alphabiotic practices in Boston, Wellesley and now Hopkinton, Massachusetts, with a focus on family care.

He was instrumental in introducing Alphabiotics to a broader audience throughout Boston and the Northeast – at a time when very few had even known of the professions existence. In the early 1990’s Neal delivered presentations on Developmental Alphabiotics to businesses and private organizations throughout the United States and Canada.

He has held certification from Alphabiotics International since 1992. Classically trained, Neal received his Doctorate in Chiropractic from the prestigious Los Angeles College of Chiropractic (LACC) in December 1988. He holds a Chiropractic license from both the Commonwealth of Massachusetts and the State of California. Neal received his Bachelor of Science in Biology from Boston College in June 1985.

Upon graduation from LACC Neal owned Newbury Family Chiropractic on Newbury St. – one of the largest family focused Chiropractic practices in The Back Bay. The Newbury Street Guide did a rare cover story (only art galleries and haute couture made cover copy) of his practice in 1993.

Neal considers Dr. Virgil Chrane as his primary teacher. He was trained personally by Virgil – logging hundreds of hours (and miles) in the two plus decades he has studied and refined it. Neal credits the original principles and philosophy (as well as a little secret) that Virgil mentored him in, as an intrinsic component of his longevity and success. It requires an acknowledgement that there is a spiritual core, that some are afraid to speak of, that is the foundational philosophy of this work. Very few grasp those core teachings of Dr. Chrane, even fewer ever attain Virgil’s mastery, his “je ne sais quoi.”

Dr. Neal Smookler made a commitment to this great man twenty three years ago to carry on his work undiluted and without compromise –  to free mankind from his slumber and assist humanity in reaching a state of grace. With that penchant, Dr. Smookler has delivered the Alphabiotic Integration safely, well over 230,000 times in the last twenty four years – an unparalleled accomplishment.

Two decades in, Neal still maintains a referral based practice as he continues to help hundreds of people each week through his application of Dr. Virgil Chrane’s original principles and philosophy. As he enters his third decade, Neal’s legacy has been one of inspiration – as nearly a dozen of his clients have chosen to pursue their own career in Alphabiotics. Dr. Smookler has dedicated his life and inspired so many others in their pursuit of the philosophy, science and art of Alphabiotics.

Neal has been featured in The Newbury Street Guide, The Improper Bostonian, City Magazine, Sacred Pathways Magazine, Spirit of Change Magazine, BodyMindSpirit Magazine as well as on WBZ, WZBC & WATD.

Finally, Neal is the founder of Hopkindton. May Kindness Prevail on Earth. 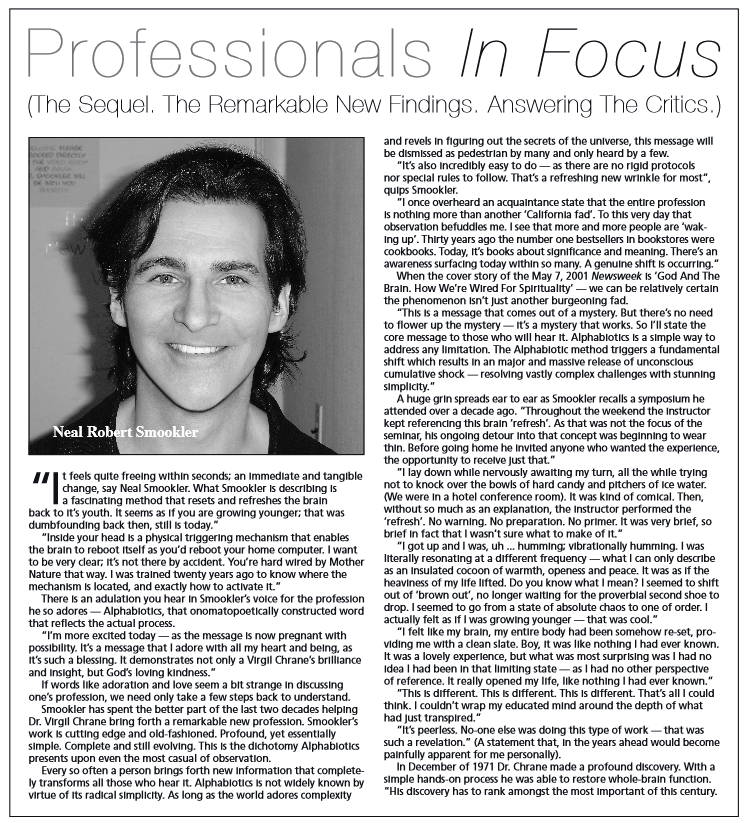 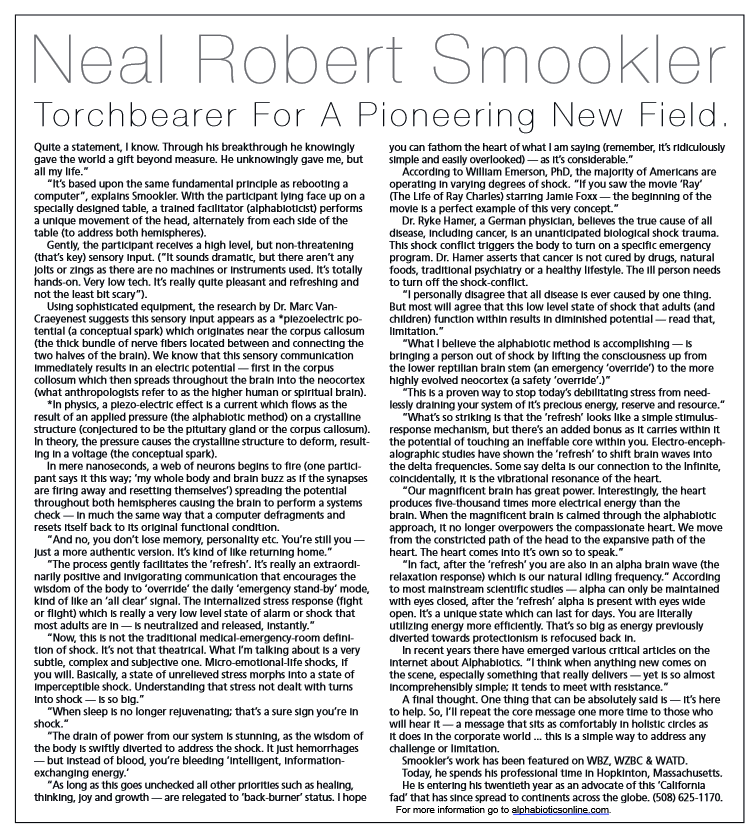